Malta is an ideal place to take up residence. Besides its pleasant climate, safe environment and hospitable English-speaking population, it offers a range of benefits to individuals seeking to acquire residence on the island, given its advantageous tax regime and competitive cost of living. Various residence programmes are available for both EU and non-EU foreign nationals.

A key attraction for non-EU countries is Malta being part of the Schengen Zone. This means that non-EU citizens, upon becoming Malta residents, will obtain a Uniform Residence Permit enabling them to travel throughout the Schengen Zone without the requirement of a visa for at least three months. In order to apply for the Uniform Residence Permit, the applicant must have a place of residence in Malta.

Ordinary residence permits allow resident permit holders to take up residence in Malta and physically live in Malta with the possibility of taking up employment and doing business in Malta.

The concept of ordinary residence in Malta makes reference to various factors that link the applicant to the Maltese Islands, including the duration of his stay in the country, the frequency, regularity and nature of visits of the country, as well as business and family ties.

The qualifying criteria can be easily complied with, thus making the attainment of Maltese ordinary residence even more attractive. Some of these criteria vary according to whether the individual seeking to obtain ordinary residence in Malta is an EU/EEA national or a third country national.

Holders of ordinary residence permits are allowed to convert to other available residence schemes.

The transfer of one’s residence from a high-tax jurisdiction to a lower tax overseas country is available to both EU/EEA and non-EU/EEA nationals.

ELIGIBILITY FOR ORDINARY RESIDENCE IN MALTA FOR EU/EEA NATIONALS

Financial independence without the need to undergo complex means eligibility testing. Individuals need to show that they are economic self-sufficient and that they can provide for themselves and for their accompanying dependants without the need of any financial support from the Maltese government.

Evidence of a physical address by purchasing or renting a property in Malta. This needs to be available at the time of filing the application. There is no minimum value property requirement1.

Duration of stay. An applicant must have physically lived in Malta for at least 3 months. He is obliged to apply for an e-Residence card with the Department for Citizenship and Expatriate Affairs.

ELIGIBILITY FOR ORDINARY RESIDENCE IN MALTA FOR THIRD COUNTRY NATIONALS

*Unless there is the need for an Acquisition of Immovable Property (AIP) permit, which applies in very specific circumstances.

For tax purposes, an individual is normally regarded as being resident in Malta for a particular year if, in that year, his stay in Malta exceeds 183 days.

Foreigners who are resident but not domiciled in Malta are not taxed on their worldwide income2 but only on Maltese source income and on foreign source income received in/remitted to Malta.

Foreign source capital gains are not taxed even if remitted to Malta. The applicable income tax rates are progressive rates from 0% up to a maximum of 35%.

The following are the rates applicable to non-residents, regardless of whether they are married or single: 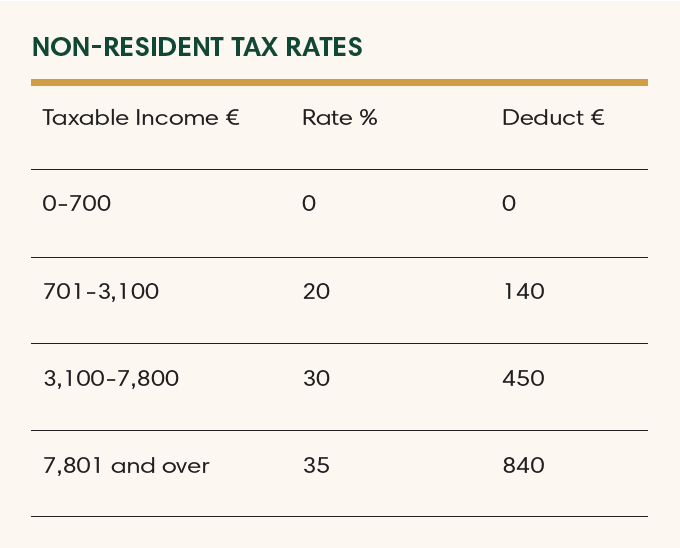 No death tax is payable in Malta. However, duty on documents and transfers is payable by the heirs of the deceased or the purchaser, in the case of real estate situated in Malta, and upon the purchase of shares in Malta companies.

However, no such duty is payable on share transfers effected by or in companies which have business interests to the extent of more than ninety per cent outside Malta. Likewise, an exemption from duty on share transfers by or in companies exists where more than half of the ordinary share capital, voting rights and rights to profits are held by persons who are not resident in Malta. Subject to certain exceptions, duty is due at the rate of 5% in the case of real estate, and 2% in the case of shares.

*2) If they are in receipt of foreign source income of €35,000 (which is not remitted to Malta) ordinary residence permit holders are subject to a minimum Malta income tax liability of €5,000 per annum.

Go Back To The Seminar Registration Page

For more detailed information email us.